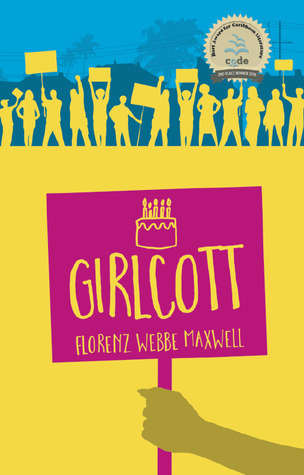 “Even in paradise revolutions can be inconvenient things.

A week ago, Desma Johnson had only two things on her mind. In exactly eight days, she would be sixteen years old. And, to top it off, she was in line for a top scholarship, bringing her one step closer to her dreams. Life was perfect and nothing would get in the way of her birthday plans. But its 1959 and the secret Progressive League has just announced a boycott of all cinemas in Bermuda in order to end racial segregation.

As anxieties around the boycott build, Desma becomes increasingly aware of the racial tensions casting a dire shadow over the island. Neighbours she once thought were friendly and supportive begin to show another side. So, Desma must learn that change is never easy, and even when others expect small things from black girls, she has the right to dream big.

In this startling debut, Florenz Webbe Maxwell takes a little known fact about Caribbean history and weaves an engaging tale that speaks eloquently to the contemporary experience. Girlcott takes you beyond the image of Bermuda as a piece of paradise and charts a narrative of resistance, hope and the importance of fighting for change.

This book was given to me by Netgalley in exchange for an honest review. This story was a historical fiction that explored segregation in Bermuda in the ’50s. It was interesting to read because we never hear about segregation in other parts of the word, at least not in depth. The main character Desma goes from her sheltered life to seeing the reality of the way segregation is all around her. It really annoyed me how people thought that she thought she was too good because she had the dream of being an actuary. Overall, I think this was a good book that could even be used in classes.

My favorite quotes in this book were :

If A is Girlcott standing up for justice, then A= x+y+z. X is knowledge, Y is integrity, and Z is action.

One thought on “Girlcott by Florenz Webbe Maxwell”